We're home and mostly unpacked from our weekend at the HRM Steampunk Symposium on the Queen Mary up in Long Beach.


First off, I want to send out a big thank you to all of the customers that stopped by our booth, shopped, took a card, inquired about things, etc., it was wonderful talking to all of you!


Thank you to the organizers of the event for all your hard work too! I know what goes into planning and setting up an event of this magnitude and I really appreciate all the work you put into everything. For a first time event it went well, even with the things that were out of everyone's control like the elevator sizes ( more on that later).


I also want to thank my partner in crime for the weekend, Cindy from Original Cin Art. Without her helping me man the booth and schlep things, I'd be sitting in the corner rocking back and forth by now and I wouldn't have laughed nearly as much as I did this past weekend.


This was were we resided during vendor hours all weekend, with the occasional breaks for the important things like coffee, food, restroom breaks and more coffee. 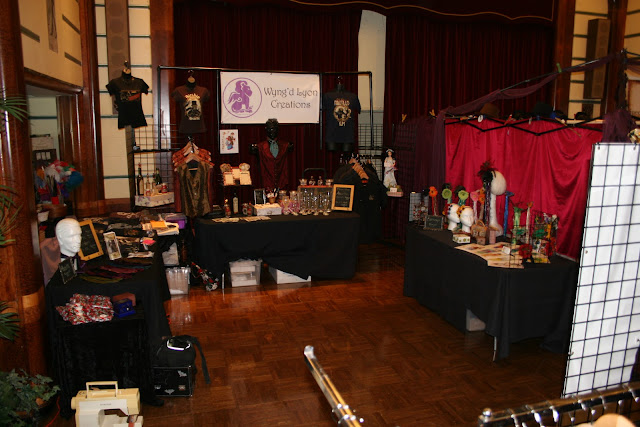 We also ended up with some great neighbors in the vendor room too!


Across from us we had Last Wear out of Seattle and the entire crew was fun to chat with throughout the entire event. Plus they have some damn cool clothing all made in the USA too!


Next to us we had the two lovely ladies from Ravenworks out of Madison, WI, who also had a great selection of men's clothing and accessories.


I made a couple laps around the vendor room though I spent most of my time in the booth, mostly because I didn't have a lot of extra money to spend on things this round plus I like sitting in the booth chatting to people as they come by.


There were a couple highlights for me this event, the first being that Chris London, the drummer from 6 String Samurai bought one of the vests that I made on Friday and stopped back by on Saturday where I was able to snap this photo of him in it. I would have loved to have chatted with him and the rest of the group he was with as they were all fun to talk and interact with.


Back in May I vended at Gaslight Gathering and took a custom order for a vest as I didn't have it in the customer's size at the event. Incidentally he was at this event at stopped by to show off his vest and also allowed me to get a photo of said vest as well. As you can see Burgundy was a very popular color for vests.

Though the hot item this event seemed to be ascots. I sold out of all the black, blue and patterned ones that I had in stock. It's a good thing I have more cut out waiting to be sewn, along with another 27 vests. 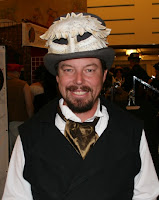 The photo above with the custom vest also has one of the ascots I did as well the one in the photo on the right. The color in person is more of an olive green with a swirl pattern in it like the burgundy vests. I have a vest in stock made out of the same material that I'm hoping to get listed up on Etsy in the next week or so along with some other great vests.


We also had some great hand blown Absinthe glasses made by a dear friend of mine for sale and I'll be posting those up for sale over on Etsy as well as some more bottles that I finished up right before the event.


Cindy and I suffer from the "Cobblers children go barefoot syndrom" when it comes to events. We're always working on things for other people or to sell. Some day we'll both actually come up with enough outfits for a Con that we don't have to scramble together from the depths of our closets.


Friday we were both dressed up as "Steampunk Romani" though true to form, I left all my belts and jingly bits for the outfit at home. Packing and loading up on 3 hours sleep will do that do a gal. 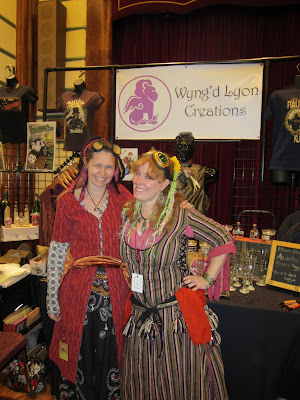 Saturday, Cindy wore her Regina Black costume and I dug out my wedding dress from the depths of my closet and wore that. (Yes, it still fits after 5 years of marriage and two kids!)

Of course drop two costumers onto a ship like the Queen Mary along with a camera and we're bound to end up doing something silly, like this: 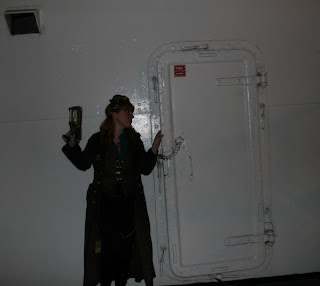 Regina Black aka Cindy making sure the coast is clear... 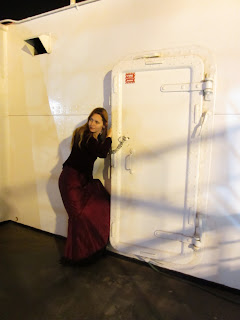 Colleen making sure she's not being followed. 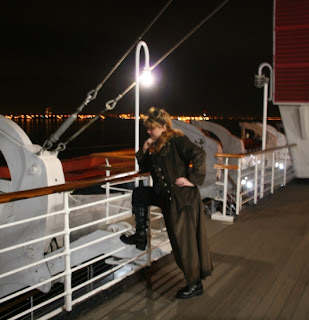 Are you pondering what I'm pondering? 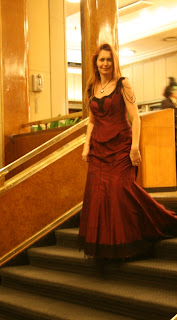 Yes, but next time I wear the pants
And then final photos of us in our outfits from Sunday: 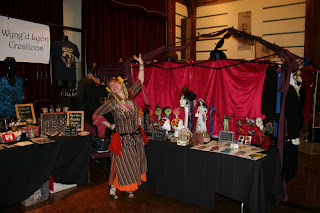 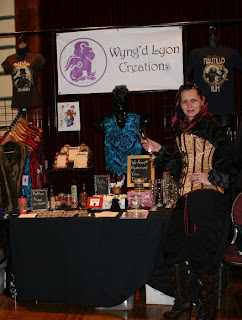 We had a great time and were sad to see the weekend come to an end (mostly, I wanted to sleep in my own bed again and see my kids.) But we're gearing up for the next event and plotting more wonderful items to add to our inventory and funny photos to take whatever site we're going to be vending at and we're looking to see old friends and make new ones as well.

Stay turned for another post for the *fun* (can you feel the sarcasm in that?) we had loading in and setting up at this event in part 2.

But before I go, one last photo of one of the costumed patrons that I got at the event, who was also a blast to talk to! 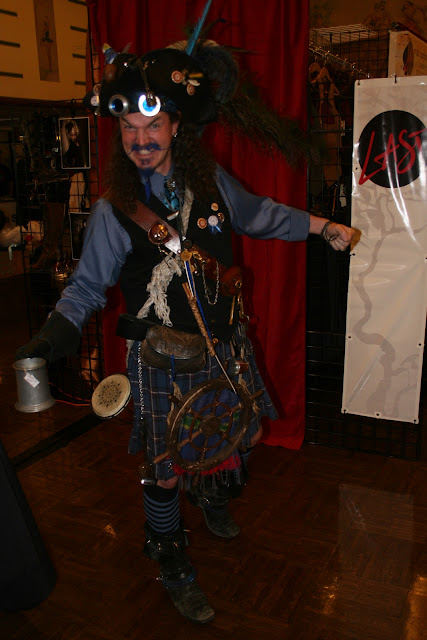 On to Part II