As I've said in the past Gaslight Gathering, held here in San Diego at the Town and Country Hotel in Mission Valley is probably one of our favorite shows to do. Part of it is because it's a local show and the other and more important part it, the people attending are fabulous and this year was no exception. 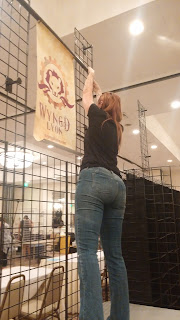 Normally we load in on Friday morning and do all the set up work, which means we're usually putting things out right up until the doors open. This year we took the opportunity to bring everything in on Thursday evening and set up the tables, grid wall, t-shirt storage (and t-shirt) as well as the banner so we could put out the rest of the merchandise on Friday morning without feeling rushed.

After some tweaking and shuffling we finished the booth infrastructure and headed out for some food before heading home to finish any last minute prep/projects/etc for the rest of the weekend. Because there are *always* things that still need to be finished.

Friday morning, I loaded up everything from the house that we needed to take with us and then headed to the shop to grab a couple bins of merchandise that we hadn't been taking to some of the other recent conventions. Halfway to the shop I realized that I forgot my cash box, not too big of a deal (though there were a couple colorful phrases said), because I could swing back by and pick it up after I picked up Cindy & Jen. What was really the icing on the cake was that the elevator was *still* not working at the building my shop is in. For anyone who hasn't been to the shop, my work space is on the 4th floor. Insert more colorful phrases and expletives on my part. 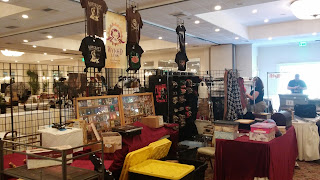 This killed any plans that I had of bringing the old steamer trunk I got earlier this year as a display piece, so I began shuffling items from that into a couple of plastics bins that I could carry down the stairs. Once those were loaded I grabbed everything and headed out the door. Chatted with the business owner across the hallway who had been climbing the stairs all week on a fractured ankle (yes, the elevator had not been working for the entire week).

I maneuvered my way to the stairs and decided that since the tubs were light enough I would just brace myself in front of them and slide them down the stairs. Thankfully the tubs and I survived the adventure unscathed, though there were a couple times I fully expected to end up like a cartoon character with tub imprints on me due to them running me over going down the stairwell. ;)

From there I got the tubs loaded into the truck and headed over to get Cindy and Jen. From there we made a stop at my house to get the ever important cash box and made our way to Mission Valley.

Now you have to understand, I don't work on Fridays, my work schedule is such that I work Sun-Thurs and enjoy Friday & Saturday off, (it's a bit of a blessing and a curse, but that's another story), so I always forget that traffic at 8:30 (I get to 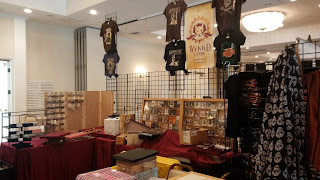 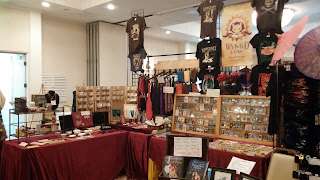 work at 7 am) in the morning sucks, A LOT, and that morning it happened to be no exception. While I muttered and mumbled about crappy drivers and slow traffic, Jen kept us entertained with her commentary of her IM conversation with Shawn from Pendragon, A quick stop for breakfast and coffee was made and we headed to the Town and Country hotel to finish setting up.

Dropping off Cindy and Jen and the two tubs or merchandise, I parked the truck and we made our way to the vendor hall.

Since the infrastructure had been set up the night before we took our time getting the rest of the booth set up, changed into our outfits for the day and waited for the customers to start coming in at 1pm when the hall opened.

Now anyone who knows Cindy and I, knows that when then two of us are together, we are not quiet in the very least. Couple that with Jen, who was working with Mike & Shawn at the Pendragon booth next door and the volume increases as does the joking and banter back and forth. This weekend was no exception.

We were in our usual spot in the vendor room with Pendragon to our left, Seven Deadly Fairies across from us with Steampumpkins next to them and our friends Joe & Lex behind us.  It definitely made the 6 hours fly by and before we knew it, it was time to head home.