Shame on me for not posting a notification that I was going to be vending at Wild Wild West Con out in Tucson, March 8-10. Real life got to be a bit over complicated and extremely stressful for about a month and a half. Thankfully the issues are now resolved and life it progressing right along as it should, with a lot less stress and anger.

So onto the recap of Wild Wild West Con II.

What a great time!

My dear friend Christal over at Christal Blu Creations went to this event a couple years ago when they first held it and had a pretty good run at it despite the wind, so I thought that I would give it a try this year.

Instead of loading up my truck and putting the miles on it, I decided that I would rent a minivan. This way everything would be inside in case of rain and/or stops along the way and if something happened to the vehicle I had someone I could yell at, plus it would get better gas mileage than my truck does.

Sadly, my partner in crime, Cindy from Original Cin, couldn't make this Con which meant finding someone to help in the booth.  I tried to talk Tawmis into coming out for the weekend, but he couldn't be persuaded to make the trek from California to Arizona. So my friend Andee from Twylite Creations volunteered to help out. I've known Andee for at least 10 years though it had been at least 7 or 8 since I saw her last so it was not only help in the booth, but a much overdue visit.

I also ended up carpooling with two of the staff members from Gaslight Gathering, Alastar & Michelle. Which was great in splitting the cost of gas & the hotel room, plus it also meant that there was someone else to drive and talk with along the way.

Thursday I got up early, dropped my munchkins off a pre-school and headed over to Hertz to pick up the rental. Now for those of you who know me, I'm not the mini-van type, but I have to say that the Dodge Caravan is pretty nifty for a mini-van. Christal, who dropped me off, got a good laugh out of me pushing all the buttons on the remote to open and close the doors and Tawmis said that he saw a mini-van and becoming a soccer mom in my near future. Fortunate for him, he was at the other end of the computer when he said that.

After grabbing the rental car, I headed out to the shop to start packing and loading up. I ordered some new storage containers specifically for shows and I needed to transition everything out of the old containers into the new ones. The nice thing about the new containers is that they hold more, so I didn't have to fit as many
containers into the car. I went from 6 tubs and 2 boxes to 3 containers and a box. My goal is to order one or two more and I shouldn't have any loose boxes floating around for shows, plus I can ship them to shows as well.

After everything was loaded up, I made a stop for gas, munchies for the road and lunch, then it was back to the house to pack my suitcase, have some dinner with the family and then head out to pick up Alastar & Michelle.

While waiting for them to get off work and have dinner I made a run into work to pick up my corset that arrived earlier in the day. Unfortunately it wasn't the one that I really wanted for the weekend (and true to Murphy's Law that one arrived while I was gone), but I had a new corset regardless.

I picked Michelle and Alastar up at 7:00, took about 15-20 minutes playing Cartris (Tetris for car loading) getting their stuff loaded, then we headed out to the shop to pick up a couple items I forgot for the booth, stopped at 7-11 and hit the road heading out 8 East towards Yuma. 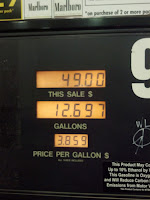 Yuma is about 2 1/2 -3 hours outside of San Diego as long as there isn't a wind advisory or some sort of traffic mess, or multiple bathroom breaks. Fortunately we didn't encounter any of that. Though I do have to say the wind farm out on the mountain does look a bit eerie at night, all you see is a field of red lights.

We rolled into Yuma about 11pm, topped off the gas tank, grabbed something to drink and stopped for a bathroom break before hitting the freeway again towards Casa Grande to get Andee.

Conversations ranged from various gaming references, coffee jokes, random geek references, SCA discussions, and many other geek and sundry topics and of course the later it got the more slap happy we all became. I think Michelle might have gotten a bit of sleep between topics and silent spots, that or half the time she was ignoring Alastar and I geeking out. ;)

We rolled into Casa Grande around 2:30 am, got a bit turned around but finally made it to Andee's place where again I played Cartris to get her luggage and everything loaded. Since it was such a short trip, we ended up putting her suitcases on the top and strapping them down to the gridwall.

The next hour and a half was more of the same subject matter and filling Andee in on some of the jokes from earlier in the evening. It was 4 am by the time we made it to the hotel and checked in which was an adventure in itself.

Incidentally they put us on the backside of the hotel on the third floor behind the pool. So we unload all the necessities that aren't going to the site and go to open the gate...no workie, try the other key, no workie either. Alastar ended up getting the gate open using his cane and we all piled into the elevator out of the cold wind, rode it to the top floor, found the room and went to open the door. Nothing. Key number two: same thing.

Now by this time all I want to do is crawl into bed so I get some amount of sleep before I have to get back up and drive another 13 miles to set up the booth and the door situation made sleep deprived me grumpy, and having to trek across the courtyard in the cold to the lobby made me even grumpier.

The clerk at the desk checked the cards and then call Security to come over with me just in case there were any additional issues. The solution to the problem....turn the lever for the door up instead of down. >.<

Once we were in the room it was mere minutes before we all passed out in our respective sleeping areas and seemed like only minutes had gone by since we fell asleep.


On to Part II