If you missed it, Part I can be found here.

One of the things that you get used to when doing conventions is the high probability that the day you are setting up your booth, you are going to be running on little to no sleep from the night prior. Either you are up until all hours of the night finishing projects (in my case it's either sewing buttons on or sewing ascots closed) or you'll be up before nature itself to drive to your destination to set up.

There was no exception to the rule this time around, we rolled in to the hotel by about 4 am, promptly passed out and then woke up to the alarm a mere 3 hours later. It's times like this that I am thankful for coffee (and so are other people).

After taking advantage of the snooze button a few times,I think I finally rolled out of bed at 7:30 or 7:45 am and made myself something akin to coffee, to be honest it was more like coffee flavored water. After the issues on the Queen Mary with no coffee pot in the room, I should know that I should always have my french press and coffee packed for out of town shows. Thankfully there was a Circle K on the way out to the freeway.

After I got all of what I was wearing for the day together in a bag (I never set up in costume, too much of a hassle) and the rest of the group was ready, we pillaged Circle K for food type stuff and each of our own favorite vehicles for caffeine consumption and headed off to Old Tucson Studios.

The drive was mottled with rain drops here and there among the Arizona desert and the turn off to the event was pretty quiet and uninhabited. Thankfully no one got car sick though Alastar likened the ride to a roller coaster with the sweeping dips in the road.

Once we got to the site, after having to turn around because I passed the driveway to the parking lot, we were pleasantly surprised with being able to practically pull up to the doorway of the vending area, which meant less steps to haul things for set up. Woohoo!

As many times as I have vended at various events, set up always seems to make my mind go blank, or maybe it's just that the coffee hadn't kicked in yet. I'm standing there trying to answer Andee's question of "What do we do first?" and can't seem to process a single thought, it's like my brain blue screened or something. Seeing my dilemma she asks about unloading the grid wall and that was just the kick started I needed to engage the brain cells, that and a few more swigs of coffee (sensing a theme yet?)

There always seems to be a theme to the Cons, the first year on the Queen Mary at HRM Steampunk Symposium, it was "Pants!", this past year at the same event, it was sliding along the promenade deck floor, and at Wild Wild West Con it was smashed fingers, mainly mine. After the colorful words were expelled from sandwiching my fingers between two pieces of steel grid wall, we started unloading totes from the van to the booth space. Most of the vendors had arrived the day before so they were mostly all set up and ready to vend, though there were a few that had arrived that morning like us.  Once the van was unloaded, Andee went and parked it in the parking lot and I started to figure out the layout of the booth and then grid wall assembly began!

Once we got the grid wall up we moved around the tables and discovered that the leg was broken, thankfully it was before we got it in place and I went to stand on it to put the banner atop the grid wall, otherwise there would have been more than smashed fingers at the event.

Being the pirate preemptive salvage experts that we are, Andee and I switched the tables with an extra that was off to the side, made sure it was functional and then I performed the daring feet of putting up the banner or as Tawmis refers to it, "shaking my money maker to help with sales". (He's lucky I like him so much, else he'd be walking the plank)

After arranging and rearranging we got the booth setup and then dashed off to the restroom to change and await customers. Our booth was the first one when you walked into the tent which was great for traffic, but no so great when the wind blew. Not only was it a cold breeze due to the rainy weather, but every gust of wind brought in a cloud of dust right into our faces.

Here are Andee and I all dressed up and ready for the day of vending.


Things were pretty dusty as exhibited by the following photo and sadly it wasn't raining enough to keep the dust down. We joked that it would be pretty obvious if someone decided to walk off with something from the table though as there would be a large dust outline of what ever walked off. (That table cloth started out black in color, by the end of the Con it was grey.)

Customers trickled in and out of the tent and we had a few sales while watching the rain come and go through the doorway of the tent. The wind was also blowing off and on and eventually the thunderstorms rolled in. I love thunderstorms, but sadly we don't get any really good ones in San Diego unless I decide to trek out to the desert to see them, so when they started out at Tucson I was as excited as a kid in a candy store with $20 to spend.
From my days camping with family and then with the SCA, you learn really quickly how to keep a tent from blowing away in the wind, or when to worry about the wind being too strong for said tent. So when Andree expressed concern about the canvas of the tent snapping in the wind, I shrugged and told her it really wasn't that bad, and it was true for the most part, until the wind picked up and snapped the roof of the tent so hard it got my attention. I looked at Andee and replied: "Ok, now that's not good." and not more than 5 minutes later another strong gust came through and lifted the tent enough to make a couple of the upright poles fall onto the ground with a clatter. Vendors and staff alike scrambled to put the poles back in. Andee was watching the wind gust through the doorway and bolted to the booth just inside the door as the side of the tent blew their display over. Had she not made that dash, the entire table probably would have fell over. Once we got everyone away from the walls and more towards the center of the tent, the event staff started talking about evacuating the tent and the vendors started packing and covering things. Meanwhile the people that were helping hold down the tent were looking for things to use to wrap around the poles. Lightning and metal are not a good combination, unless you really have the desire to be a lightening rod. Bits of rope were used as were belts and anything else that was long enough to wrap around the poles and help keep it down while we waited for the tent company to come out and re mediate the issue.

The issue being that the crew that came out initially didn't stake the tent down properly, as in they didn't stake down all the poles, just the corners and a few select ones along the long sides of it. Not something you do with a tent that is about 40' x 80' in size especially in the desert. Shamella, who was the vendor coordinator was an absolute dream, she took care of the problem as best as she could and checked up on the vendors to make sure they were aware of what was going on. The owner of the company ended up coming out with a crew to fix the problem, but it was still going to be a couple hours before they were done. So most of the vendors closed up shop and headed out for the evening. Andee and I went into the barn area and waited out the last hour of the day with Alastar and Michelle as the Gaslight Gathering table.


Once the main vending area closed for the day, we loaded our tired, dusty selves into the van and headed back to the hotel.

End of day conversations generally need an interpreter  mostly because they're full of moaning and groaning from any injuries or muscle strains inflicted from setup or because  one is so tired, the mouth and brain are not working in unison. The only discussion that made much sense was what we going to have for dinner, that and the awe that came over us when we looked up and saw this giant floating section of rainbow, not a full rainbow, but a chunk of rainbow mid sky. In the photo below you can see it just between the two mountains. 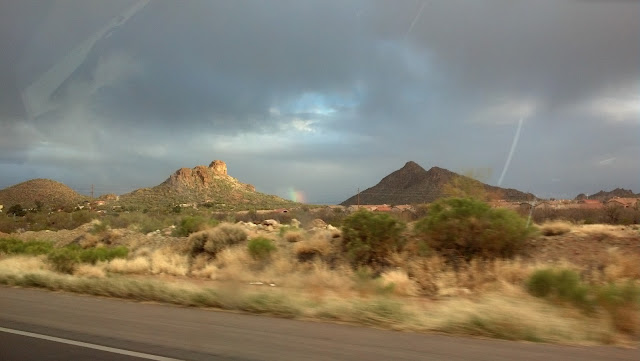 Of course when we return to the hotel we encounter the following: (various holiday and garden figures along with bottle caps and other miscellany glued to the vehicle - and here I though we only saw this weird stuff in California, it's nice to see that other states have weird folk too.) 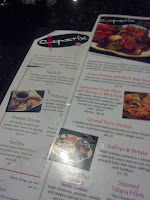 Settled back in the room we rekindled the arduous discussion of what the heck are we going to have for dinner. Alastar & Michelle were on a fairly tighter budget than I was and I really didn't want fast food. Traveling messing with my body enough so I try to eat on the more healthy side of things. After much deliberation and internet searching we settled on Chopstix for Chinese food, which was reasonably priced and a couple blocks up the road from the hotel.

The service was great and the food was pretty tasty. The family with the kid that decided the high ceiling restaurant was a great place to try and communicate with the dolphins or dogs (we weren't sure which) was not so pleasant.

After stuffing ourselves we stopped by the Circle K for some refreshing adult beverages (read: cider & beer), and a few snacks (chocolate). The guy at checkout was a bit puzzled by my  "got root?" shirt and the easiest way to explain it without his eyes glazing over was to say "It's a computer thing" and be on my merry way.

Next level: The Skype session with my kids so they could go to bed and then a nice hot shower.  It's one thing to be grungy and gross from set up at a Con, it's another to be that and then have a fine layer of dust coating your skin and hair. By the time we got back to the hotel after dinner, I was ready to stand in a hot shower for at least an hour. Let me tell you, that shower was almost as good as the showers when we come back from a 5 day trip out to Potrero County Park for an SCA event over Memorial Day weekend. To say it was heavenly would have been an understatement.

The rest of the evening was spent working on making more cameo pins and ascot pins before crashing out for some much needed rest.