For those of you just joining us, here are Part 1 & Part 2 of the recap.

A full night's sleep does wonders for the body,  well at least for Andee and I it did.  Poor Michelle said she felt like she was sleeping in a saw mill due to Alastar's snoring. We told Michelle that  if she had problems sleep again, she should could come crawl into bed with us, since the bed we had would have slept the three of us comfortably.

We all dressed in our respective outfits for the day and hoped that Saturday's weather was going to be better than Friday was and I was hoping that the vendor tent we were in survived the night and that all our stuff was still in a sell-able condition. We got to the site, parked the van and headed to the tent to see what awaited us. Thankfully everything was still in one piece and just needed to be put back into a presentable manner. After about 30 minutes of work the booth was ready for business: 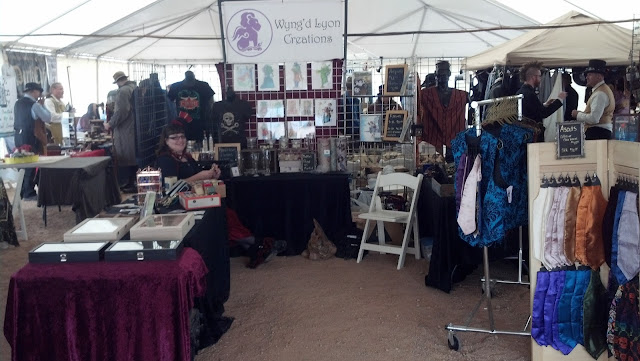 Saturday's outfit is known as my Mina dress, as it's based off the dress that Winona Ryder wore in Bram Stoker's Dracula. It's one of my favorite pieces currently in my closet for events like this. Coupled with the fan that was a gift from someone who professes to be my Number 1 fan the outfit truly comes together. Eventually I plan to make some sort of fascinator or hair piece to wear with it as well. Though I have to say after this event, the dress sorely needs a good dry cleaning as the train was drug through the dust and dirt in the vendor area. 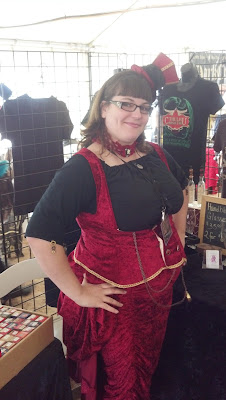 It was also Andee's day to be in red as well. This being her first Steampunk type event she pulled together some really cute outfits.

Vending on Saturday made up for Friday's nightmare and though the organizers couldn't do much about the lost vending time, they were awesome and bought all the vendors in our area pizza for lunch.

The weather was still a bit cool and there was some rain off and on, but the wind was pretty mellow and the day went so fast that it was 5pm before we knew it.

Once the vendor area was secure and everything was covered we headed over to meet up with Michelle and Alastar and headed off to the parking lot.

For those of you who aren't familiar with Old Tucson, everything is a dirt road except the parking area which is asphalt. So walking in general is a precarious adventure with all the rock and the land minds that the horses leave behind.

What makes the walk even more of an adventure is the addition of high heeled shoes or boots. Just as we passed the guard house to cross the walk bridge to the parking lot, one of the attendants mentioned to Michelle that she was pretty brave wearing her two inch heeled shoes. She laughed said that it was mostly walking slow and watching where you walk. I laughed and responded with "You walk very carefully, especially in shoes like this," and showed him the 6 inch heeled boots that I was walking in. He stood there boggled that anyone would wear shoes like mine in an environment like that and from behind me I hear Alastar say "+20 boots of Gothness" and laugh, (yup we're a bunch of gamer geeks.)

We piled into the car and of course the first thing that came off was the boots and then we headed back to the hotel. Well that was the intent. We were so tired from the long day and so involved in our conversation on what to do for dinner, no one realized that we got on the freeway going the wrong direction. We actually didn't notice it until we got to an area where there was construction happening and I commented that I didn't remember it from the day before. It was then we realized that we were headed back towards Casa Grande and not to the hotel.

Once we got that navigational incident corrected, we headed back towards the hotel, stopped at Wendy's for dinner, where they gave me Sweet Tea (blech) instead of regular tea. Thankfully I got that corrected before I took a swig of it thinking it was plain tea.

Upon returning to the hotel, we discovered that our room key didn't work (again) and I was too fried and hungry to walk down to the lobby, thankfully the guy in the room next to us was getting ice and I asked if I could use his phone to call the front desk. A few minutes later security came up with new keys and said that they had the date set wrong for the checkout date.

Once we were back in our room, dinner was devoured and more refreshing adult beverages aka beer were consumed. I Skyped with the hubby and kids, worked on some more cameos and then passed out for the night.