I always dread the last day of conventions. Partially due to having to pack up, drive home and unload, but also because it means the end of a fun weekend with great people and having to go back to my real job. Not that I dislike my job, it and the people are great, but there is just something magical about cons and the people there.

We got up about 7:30 am, dressed, packed the suitcases, grabbed the other miscellaneous items (the beer!) and then fought for a spot on the only elevator down from the second floor of the wing of out hotel, tossed the stuff haphazardly into the van and headed off back to Old Tucson. We skipped the stop at Circle K as I had a can of Irish Coffee Monster and everyone else also had their own beverages of caffienation.

Once on site we uncovered the tables and waited for vending to open for the day. We made some changes to the way the table was laid out and moved somethings around for better display.

I always try to wear something on the last day of the Con that I can break down the booth in. I'm still piecing together my Airship Captain's costume and the photo below is one of the incarnations that I put together when I was tossing things into the suitcase. 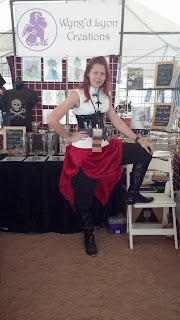 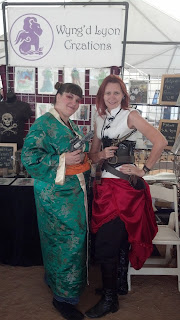 Andee wore a cute Kimono that she had made a few years back for another event that she attended. The highlight of the day for me was the little boy that was hanging outside the back door of the vendor tent. As I was headed to the Ladies' room he was standing there in his sheriff's outfit (complete with badge) and told me to draw. So I drew my flint lock pistol and we stood there standing off. As I was walking backwards, a man came out of the tent, snuck up with his fingers drawn as guns and told the little boy to drop his gun. My reply to the little boy, "You always have a henchman in the wings." and made my way to the restroom. On the way back the same little boy was outside and he aimed his gun at me and said that he shot me and there was an alien inside me (he was quite the imaginative kid!). I chuckled and walked back to the booth and told Andee that I had been shot and had an alien inside me, just in case it decided to burst out of my chest or something. Her response was "Well hopefully the corset will keep it in." 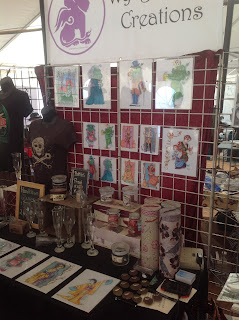 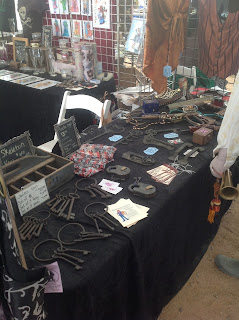 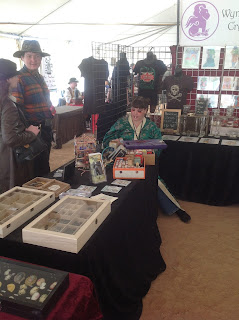 Traffic for the day came in waves and was a bit lighter that Saturday, but there were still a good amount of customers coming through to shop and get last minute items before they headed home.

This gave me some time to get some shopping done and do my usual tradition of buying something for Tawmis as a thank you for the work he does on the Facebook page and on Twitter while I'm at the Cons. (Though he always chastises me for buying things for him.)

This time I got him an iPhone cover that had an old comic book cover of Thor. I also got myself a cute necklace that has a falcon on it in a military style hat. There were a couple other things that I wanted to buy, but I knew that if I brought home any large boxes, my husband would have had a little of kittens since we're not moved into our new place yet.

The downside to the day is that we had got shop lifted for the first time, the even worse part of it was that it was one of out own Steampunk folks. I was rummaging through one of the boxes under the table looking for something and Andee was standing in the middle of the booth. She saw the man walk back and said he made a motion like he picked up a skeleton key and then kept walking. At first she thought it was nothing and then she saw him repeat the action as he passed the jewelry booth and walk out the tent door. She turned to me and mentioned that she thinks we were just shoplifted from and then went to the other vendor to tell them what she saw. They looked at the tray the man passed by and confirmed that there was an item missing. She and the other vendor went out of the tent to see if they could catch the man, but he was already most of the way to the parking lot.

I was more irritated about being shoplifted by one of our own that the shoplifting itself. I guess with spending so many years in the SCA, you get used to those that you call "your own" being honorable and stand up people. I know that not everyone is like that and every group has it's bad apples, I just find it very disappointing when things like this happen because those are the ones that the reports end up focusing on.

All that aside, we finished out the day on  a good note and began breaking down the booth when the time had come. Michelle and Alastar came over once they were done and waited for us to finished packing before we began load out.

Of course like set up, my brain always decides to go out in left field and leave me in a state of "Where the Hell do I start packing up?" After about 10 minutes of standing there confused and Alastar laughing as he says he's going to stay out of the way, thoughts start processing and I started putting things in tubs and such. Once the packing was complete it was time to play Cartris again and load everything up. True to the theme of the Con, I smashed the heck out of my fingers loading up and tying down the grid wall. It was mostly dark when we finished and got on the road to Casa Grande to Andee's house.

We regaled each other with the tales of the day from the Con to keep ourselves from falling asleep. We made it to Andee's without any incident and were welcome by a wonderful spaghetti dinner cooked by Andee's husband, Frankie. After sitting and chatting for a bit and settling up Andee's sales, Michelle, Alastar and I hit the road for Yuma.

One we stopped at Yuma, we gassed up the truck, made a bathroom stop, grabbed something to drink and I switched seats with Alastar and let him drive back to San Diego.

We got to the shop about 3:00 am, unloaded and then headed to North Park to drop off Michelle and Alastar. I finally got home about 4:30 am and passed out for about 4 hours before getting up and taking the van back to the rental place.

The rest of the day was spent at home relaxing doing much of nothing before having to head back to work on Tuesday.


Over all it was a great Con and I'm really looking forward to next year. Cindy has said that she will be there and Andee has committed to going as well. So look out Old Tucson, we're planning on returning in full force!

I want to give out a heartfelt thank you to all the participants that came out making the convention so successful. I also want to thank the staff of Wild Wild West Con for all their work and for making things right as much as they could.

See you all next year!