For those of you who follow our Facebook page, I'm sure you saw the photos from the event that Tawmis was so kind to not only post, but add some pretty great commentary to as well. If you aren't following it, you missed some great posts to which I owe Tawmis a debit of gratitude and maybe a pummeling for at least one post. (Just kidding Tawmis!) He was even kind enough to cross post updates for Cindy over at her Facebook Page.

Overall the event was a blast and we made not only a lot of great contacts but some new friends as well.

The new location for the vendors room was much nicer and more central to the goings on of the entire event, plus it was pretty darn close to our hotel room on the boat too! 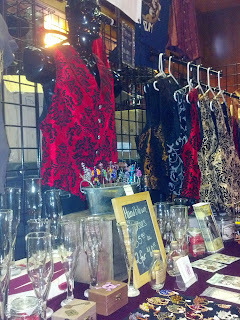 Thursday night Tawmis and I loaded everything from the shop for the event into my truck and I parked in the back yard with a tarp over it and prayed that it didn't pour all night. Sure I could have loaded up in the morning, but for those who know me, early mornings are not my thing no matter how much coffee is put in front of me. It was enough of a challenge to peel myself out of bed at 5 am to load up my suitcase and the rest of the items from the house. Thank the inventor of the programmable coffee pot, that's for sure.

I headed out to Cindy's at 6am and from there we made a stop for (more) coffee and some snacks for the road and then hit the freeway up to Long Beach. For the most part the drive was pretty uneventful, though there was a bit of a traffic jam that appeared out of nowhere and that I had to slam on the breaks for, but we came out of it unscathed and quite a bit awake for the rest of the trip.

We made it to the Queen Mary about 9 am and pulled into the staging area and in true form had the truck unloaded in about 15 minutes, much to the amazement of the security guard that was there. We laughed and told him that we don't mess around when it comes to getting things loaded or unloaded.

Now one of the biggest complaints last year by the vendors was the fact that we had to use the tiny elevator at the back of the ship, and by tiny I mean hotel maid cart tiny. If you are by any means claustrophobic  that elevator is the last place you want to be, ever. Well this year, we were told that it was in the contract that we could use the main (read: real sized) elevators to load in and out of the event. Bzzzzz! Wrong, well mostly wrong. If your items didn't fit in the shoe box elevator, you could take them up the main one, otherwise it was trekking to the back end of the ship to squeeze you and your dolly into the elevator and then try to get off the elevator before the door tries to smash you as you get out and then trek back to the middle of the ship to unload in the vendor room. Adventures in unloading to say the least.

1. Truck unloaded in loaded area - check
2. Spend 15 minutes trying to figure out what is going to go up first and how to minimize trips in the elevator of doom(tm) - check
3. Load up said dolly (which I replaced the inflatable tires with solid tires so we didn't have the flat tire/OMG why can't we move the dolly problem like we did last year.) - check
4. Maneuver the dolly into the freight elevator with out killing ourselves or each other. (mental note: bring oil next year to deal with ear piercing squeaky elevator gate) - done with lots of laughing and swearing.
5. Walk the loaded dolly that seems to have a mind of it's own on the varnished hardwood floor of the Promenade deck of the Queen Mary while trying to maintain my own balance because my boots have no traction while trying to find the vendor area with no signage. - check
6. Arrive at said vendor area and try to figure out where we're setting up. - check
7. Find our tables and unload the dolly and exit said vendor room to do it all again - check

Of course upon exiting the vendor room, the dolly decided that it had a mind of it's own and went right while I slid left and by slid I mean almost ended up on my butt in the middle of the room. At that point Cindy dubs the dolly as being possessed.

Trek back up the Promenade deck without falling on my rear to hop back into the elevator of doom(tm) (EoD from here on) and ...oh crap, what floor do we get off on to get back to the dock?

Gridwall - I have a love/hate relationship with this stuff. (you can see a photo here  if you don't know what it is). It's great for displays, but a pain in the rear to haul around because it's metal and it can be heavy. For this show I bring 6 pieces that are 6' tall, I leave my two 8' pieces at home for this show. If you read last years re-cap you should remember that we had to haul the gridwall up 4 flights of stairs. So we thought "Hey, this year we can take the gridwall up the main elevator and be done with it." Yeah, not so much, we started to head that way and the security guard intercepted us and said we had to use the other elevator and the 6' pieces should fit just fine.