Continued from Part I

So this is how things usually start out in the booth space: 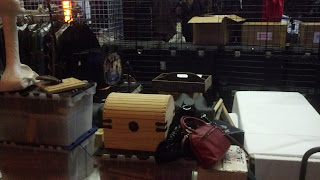 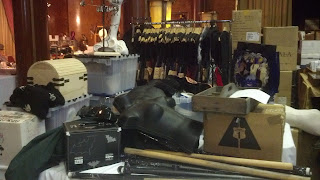 Piles of totes, boxes and naked half body forms, or as Cindy calls them, the Nudie Pants Family. 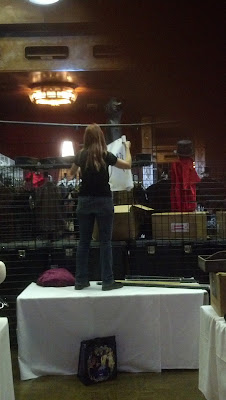 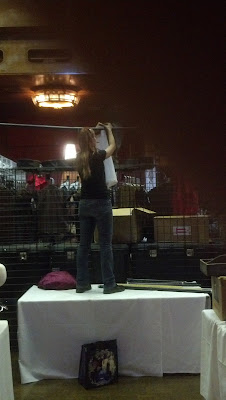 One of the above photos was (intentionally) sent to Tawmis because I know that when I climb on things around the shop it sends him into a panic (even though he tells me I'm quite cat like). Of course he took it in a completely different direction over at the Facebook Page in which he posted this and then proceeds to text me back and tell me that I was probably going to kill him for the post.

After looking at the post all I could do was laugh, especially once the comments started rolling in. Again it was going to be one of those kinds of weekends (and no, I haven't pummeled him....yet)

The banner was up shortly there after and then came the fun part of figuring out where things were going to reside for the weekend. 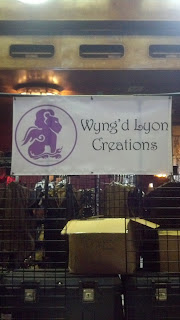 The booth setup is pretty much the same at each show, but with minor adjustments here and there.


The Absinthe Glasses always end up at the back of the booth, mostly for fear of them getting knocked over and broken, though I was doing a pretty good job on my own trying to break them as I was setting up them up on table. I actually ended up chipping the base of one of them when I smacked it against another glass.

T-shirt forms and vests end up hanging from the gridwall and PVC pieces for display and Cindy's are gets dispersed throughout the display as well. 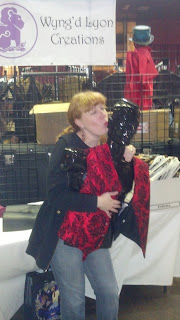 Of course booth set up is never dull either, if we aren't dropping things, tripping over totes or each other, there are silly antics like Cindy dressing her "boyfriend" for the weekend.

Booth set up done....time to check-in to the hotel room. While Cindy manned the booth I headed to the front desk and checked in. It was a great time to do so, because there was no one in front of me. 10 minutes later I had our room keys which was right around the corner from the desk and right near the stairs two floors down from the vendor room! After I deposited my suitcase (thank god I wasn't flying that thing was heavy), I changed into my outfit for the rest of the day and went to switch places with Cindy so she could change as well.

Cindy was also offering up custom sketches during the con and she made a sign advertising and was going to put "See the red head"on the sign and then realized that wouldn't have worked since we're both red heads. This is what she came up with instead: 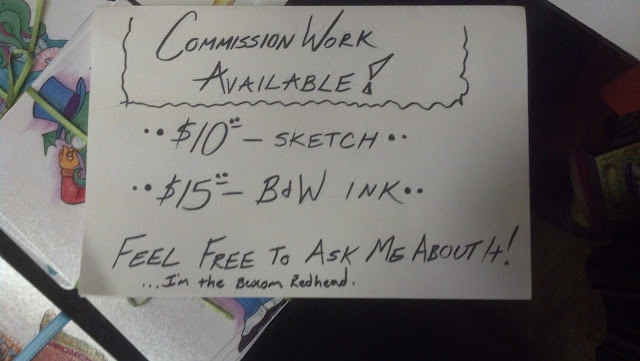 Here we are in our outfits:


Friday's vending went by pretty quickly. Cindy worked on some sketches while I worked on adding more items to my inventory program on my iPad. By the time 6 pm rolled around for a much needed change into jeans, a beer or two and food.

Last year we found the The Auld Dubliner and had dinner there and also discovered Feckin' Whiskey which I had to try just for the name alone. I was presently surprised how much I enjoyed and promptly bought a bottle once I got back to San Diego. This year we had it in our flask in the booth, purely for medicinal reasons though. Since we only got to have dinner one night last year, we decided that was going to be our dinner place both nights this year. We grabbed Noell and Alastar, hopped the shuttle and headed off to grab some beers and Irish food.


Then it was back to the hotel for some much needed prep and sleep for Saturday's vending.

On to Part III