If you haven't been following the thread the previous posts about the weekend are over at here at: Part 1 & Part 2

There is something to be said for being able to wake up naturally and not by a 3 or 5 year old climbing over you wanting you to get up because "It's sunny outside mommy!" I love my kids, I really do, but man do I enjoy the weekends where I get to go to out of town events and have some "Me" time.

So when I woke up on my own at 7:30 am I was happy yet irked that I was up that early on a Saturday morning with no kids to wake me up. Though it did give me time to shower, and go through the unfinished vests that I had brought with me to work on before vending opened at 10 am.

I have to say Cindy rocks my world, she helps me out immensely by sewing buttons on vests that I sew together, handwork is not something that I particularly care for unless it's cross stitch or needle point. Hand sewing buttons or hems is one of those things I hate to do. Thankfully Cindy is the opposite, she loves to hand sew and I owe that woman vast amounts of chocolate or whiskey, or both!

The one drawback about the Queen Mary compared to most hotels is that there are no coffee pots in the room. We discovered this the hard way last year, thankfully they have a pretty good coffee cart on the ship, but with the amount of coffee that I go through, it gets a bit pricey at $2 per cup. So this year I dug out the trusty french press and the electric tea kettle, and brought a pound of coffee with me. So with coffee cup in hand, I plugged in the sewing machine and started adding button holes to the unfinished vests. By the time 9:30 rolled around I had added button holes to 8 vest and left it at that to get dresses and head up to the vendor hall. While I was sewing Cindy ran up to the coffee cart, got herself some tea, an assortment of meat and cheese and a danish for me.

Then it was time to get dressed and head up to the vendor room. Now I decided last year, due to lack of sewing time for myself, that I would take my wedding dress with me since it still fit (even after having 2 kids...you ladies feel free to call me what you will, it wouldn't be the first time.) and I didn't know if the Victorian dress I made a few ~cough9yearsbackcough~ still fit after having 2 kids. (I found out last May it did still fit - for those who were curious). I decided to bring it again along with the Victorian and my dress that I dubbed the Mina dress (this past Halloween's costume), like I said before it was a good thing I wasn't flying anywhere, I'd have gone broke in the "heavy luggage" fee area.

Dressed and caffeinated, we grabbed out items for the walk up the two flights of stairs, though the one thing I didn't take into account is that I needed to life the skirt up on my dress so I didn't step on it, which of course was a bit difficult considering I had a large box in one hand and my coffee cup and cash box in the other. Obviously I hadn't had enough coffee yet.

Making it to the first landing with only stepping on my skirt once, was a bit of a feat, getting to the next one had me almost on my rear, so once I made it to the top I adjusted things in my hand and then grabbed my skirt and made it to the Promenade deck with out killing myself or dropping the cash box & my coffee. Progress!!!

Set up of the items we laid down (Absinthe glasses) and cover up went much better, I didn't try to turn the glasses into multiple pieces this time. Once set up we sat and waited for the doors to open.

Sales went much better on Saturday and we had quite a few visitors. Finneas from League of Supremely Evil Revolutionaries came by and gave us tags for our badges that said "Minion" and various other friends of ours from the SCA stopped by to see how we were doing.

In between customers, Cindy and I finished up the vests that I had worked on earlier in the morning by adding the buckles for the back and sewing the care & content labels into the inside.

Generally I don't get out of the booth much aside for bathroom breaks or to get food and the occasional loop or two around the vendor hall. So when I finally finished most of the sewing, and devoured the salad that Cindy ran and grabbed us for lunch I decided to take a stroll around the vendors room.

The little guy to the right was a visitor to our booth from the vendors with all the Pirate accouterments a couple spaces over, where I picked up a button that Cindy and I decided that fit Tawmis perfectly.  (For those who don't know Tawmis, he's got some fabulous penmanship and he's also a pretty good writer, but he'll also say I'm biased too)

After my purchase of the button I continues on my wanderings but didn't get much farther than the booth belonging to Robert Quill where I perused some of his artwork and chatted (or as Tawmis would say "flirted" because in his world, me being nice [read=saying hi] to anyone male means I'm flirting. You'd think he was jealous or something ~winks~) with him for a while and dropped a nice penny for him to draw a piece of art of me, for me. He told me that he was talking at a panel (called Naughty Custom Art and the People Who Love It )  at Midnight and that Cindy and I should show up.  After I finished chatting with Robert, I made the rounds of the rest of the room and chatter with some of the other vendors to see how they were doing. Everyone seemed to be in good spirits for the day and were looking forward to attending the Masquerede Ball later that evening.

Once vending ended Cindy and I made a mad dash to the hotel room to change into comfy clothes (jeans & t-shirts!) to head back to The Auld Dubliner for dinner and beer. Hey! What can I say, I like good Irish food and Guinness!

After a nice Skype session with my kids to wish them a good evening, we headed out to the shuttle and off to stuff ourselves before heading back to the hotel to change into our clothes for the ball.

Forgetting that it was a Football Playoff weekend, we arrived a pretty well packed pub, though we were lucky enough to grab a table near the bar and between two TVs. Cindy isn't much of a football fan and while I do enjoy it, it's not something that I have to have myself glued to the TV for. We arrived a bit into the 3rd quarter of the San Francisco/Green Bay game and incidentally sat behind a group of people rooting for Green Bay. (I'm a San Fran fan) What made the evening hilarious was that one of the guys at the table in front of us was from New York, no big deal right? Well except for the fact that he was complaining it was cold.

Wait! What?! Cold?! True, we've had some chilly weather (for us SoCal folks) and I'm pretty much always cold, that's what happens when your thin, but right after I sat down, I took off my sweatshirt and was comfortable in my t-shirt. It was not cold in the least. The waitress has us cracking up with her joking and Cindy and I were also doing our fair share of teasing too. The icing on the cake was when the waitress brought the guy out a hot wet towel. We died laughing, heck I even tipped her extra because of it.

After we had our fill of good food, beer and a shot of whiskey, we headed back to the hotel to get ready for the Masquerade ball and that is when things went a bit south. 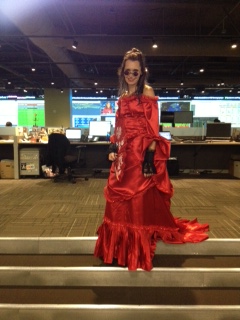 This is my Mina dress, based off Mina Harker's Gown in Bram Stoker's Dracula. I think I worked on it for at least 3 weeks. The pleating on the bottom was a 5 hour process alone.

So I decided that it would be a great dress to wear to the Ball, that is until I got it on, zipped up and the side zipper of the top decided that it was going to give up the ghost and split right in the middle. Cindy and I got it fixed, well we though we did and it died again.

Ok...plan B.. change dresses? Not really what I wanted to do. Plan C...wear dress with the under corset? Didn't look half bad, but it really needed the top to make it a complete package. Ok, think Colleen. Ahah! Black waist corset to the rescue! Which resulted in this look. Not half bad for improvising, if I say so myself. 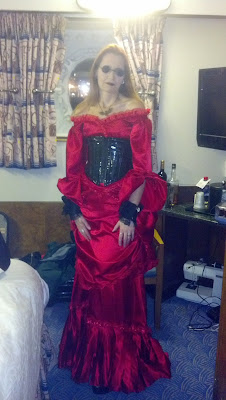 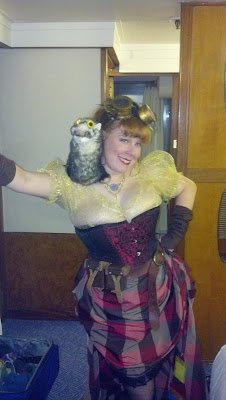 Lee Presson & The Nails was the band that was playing and we had a great time listening to the music and watching others dance and socialize. After the ball came to a close we headed back to the room, cracked open the bottle of chocolate wine and giggled and interjected commentary into the conversation that was coming from the room next to us by some bit of royalty from the event. (Sarah you would have loved to have been there!) Yes the walls are paper thin, last year we had the people next to us banging on the wall because we were giggling too loudly. This time we were still giggling, but I don't think the neighbors even took notice, actually it was more like they didn't hear us over the sounds of their own voices really.

Soon there after we were both dead to the world and hopefully were going to have enough sleep to get us through Sunday's vending, load-our and drive home.