We're back at it!

Cindy (Original Cin) and I are at it again. This weekend, January 11-13, 2013, we'll be back on the Queen Mary for HRM Steampunk Symposium.

Last year's event was a blast and pretty well done considering it was it's first year. I've got high hope for this year and we're even hoping that we'll make it out to the Ball on Saturday night, provided that we aren't fried from a long day of vending or passed out from the drinks at dinner. We've been yearning to go back to The Auld Dubliner for dinner, their foor is awesome and not only do they pour a proper pint of Guinness, they have a nice selection of Whiskey too!

The plant is to depart San Diego around 6 am and arriving about 8 am barring traffic into Long Beach. From there we'll  be loading in probably sleep deprived as usual. Something that is pretty much a norm for any Con  that I've ever vended at. Hell, we'll still be sewing and such in the room and probably the booth as well. No rest for the wicked I tell ya. ;)

There are photos and a review of last years event here and while we're gone, I'll try to either post photos or get them over to Tawmis to put up either here or over on our Facebook page depending on what he has the time for.

We're not sure who our neighbors are going to be this year in the vendor room or what the set up is going to be, but either way there will be some shenanigans afoot. That's what happens when you get two sleep deprived red heads hyped up on caffeine together.

Fair warning to those aboard the Queen Mary, I've heard rumors that the The League of Supremely Evil Revolutionaries may be plotting dastardly deeds this weekend as well, so be on guard.

Until then, I leave you with this photo of Cindy and I from last year: 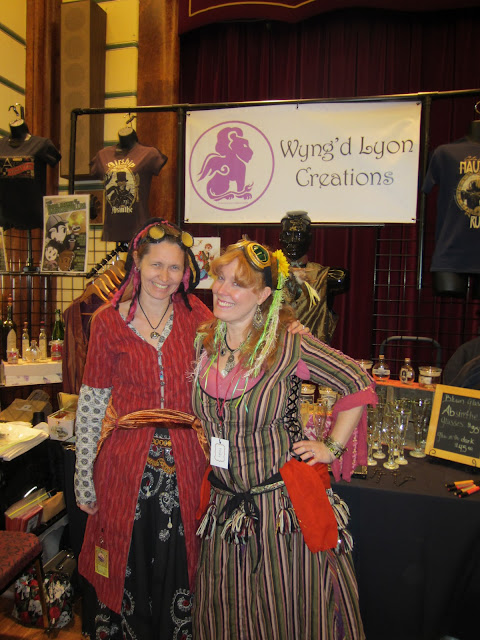